We Become Who We Think We Are . The Power Of The Subconscious Mind. Part 1

Social media is a powerful tool; there is no arguing that. And while in many ways the “fitspo” accounts on Facebook and Instagram can be detrimental to someone’s self esteem and body image, there is one company in particular who has been using social media to spread a message of an entirely different kind. The company is Dove. If you haven’t seen any of their videos pop up in your newsfeed I’d encourage you to YouTube these videos. They show everyday people (usually women) showing exactly how their subconscious views their body image.

A couple months ago I came across one such video from Dove’s latest beauty campaign. In this video they had women write down their negative self talk in a journal, the journal was then given to actors to learn (unbeknownst to the women who wrote them). The Dove representative then took the women out to lunch, where the actors were sitting at the next table. The actors said the things written in the journal to the woman they were “out to lunch with”. As you can probably imagine, the original women were horrified that someone would have the audacity to say those kinds of things to another woman.

Yet we don’t hesitate to say absolutely horrible things to ourselves on a regular basis. So if we wouldn’t say these things to someone else, what makes it okay to say it to ourselves?

I thought I had gotten pretty good at managing my negative self-talk, or turning down the volume on my inner “mean girl” as I’ve heard her been called. So a last year I decided to put myself to the test and for two weeks I decided to keep a journal of my negative self-talk. I decided that I wouldn’t stop the negative thoughts that came into my head, nor would I turn them into positive thoughts. I also thought that I had enough self-love inside of me to get through anything. What I learned in those two weeks about the power of your words is a lesson I will never forget.

Monday: You can’t run 12km, you’re not fit enough to just go out and run
12km

Tuesday: You’re way too slow, look at all these people passing you.
Maybe if you lost some weight your body wouldn’t be so heavy to carry around.

Wednesday: Why would anyone want to be friends with you? You have
nothing to offer anyone.

Who do you think you are getting a tattoo this big? There’s no way you can pull it off. People are going to laugh at you.

Thursday: You aren’t good enough to run with these people. Who do you
think you are even trying? You were foolish to think you could.

Maybe if you lost a bit of weight you’d be able to keep up.

You should probably put some makeup on before you scare someone.

Friday: Yuck, you should probably do something with your face.

Tuesday: Well that chocolate sure is coming back to haunt you today…fat piece of
lard.

You probably shouldn’t wear tights all day; you don’t have the body to pull
it off. You’re not skinny enough.

And that’s where I had to stop. I honestly couldn’t handle the effect it was having on my body and mind anymore. Even now as I write it I feel sick and embarrassed. It dragged me down to a depth of sorrow I never thought was possible before. In just a week and a half, I broke my own heart and shattered my own spirit. I had started believing the words in my head (again). I shut myself off to my friends, and retreated into isolation as best as I could. And worst of all, I almost quit. I almost quit a friendship with my best friend, because I didn’t think I had anything to offer. I almost quit yoga and my handstand challenge, because I was convinced I could never improve. And worst of all, I almost quit on myself.

But it’s not my truth, not anymore. So why am I sharing this with you?

We have a tendency to think that we’re the only one’s who speak to ourselves the way we do. We look at the people around us that we love and admire, and could never imagine them being insecure or saying the things we do to themselves. Yet disrespecting ourselves and negative self talk has become the norm in our society.

I’ve learned over the past year of telling my story to people, of being open and vulnerable that people don’t expect it from me. They see me as a woman who has her sh*t together. People are stunned to find out I see a hypnotherapist and a life coach to help me build my confidence and self worth.

But we are all in this together! And we need to come together if we’re going to ever change the epidemic of hating ourselves, or never being good enough!

So I’m hoping, if you learn nothing else from this week’s post, that you take away these three fundamental truths:

1. Your words have energy. Negative words will cause you to rot from the inside out, while positive words will build you up and help you shine. So choose carefully.
2. You believe what you tell yourself. So everyday, tell yourself something loving, something productive. It doesn’t make you self-centred or cocky. It makes you courageous.
3. Never miss a chance to offer someone else a kind word or the opportunity to build him or her up. You never know what they’re saying to themselves. The people who look like they have it very together, may be the ones who need to hear it the most.

I’m going to leave you today with a quote I came across from actress Kate Winslet and a simple message:

“As a child I never heard one woman say to me ‘I love my body’. Not my mother, my elder sister, my best friend. No one woman has ever said ‘I am so proud of my body’. So I make sure to say it to Mia, because a positive physical outlook has to start at an early age”.

It’s time for a change. We can’t expect to see a change in the world around if we cannot first change and love ourselves. So be a shining example to those around you. Be the change – love yourself. 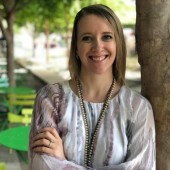 Manifestation – Have you literally sabotaged your own success?

6 Ways to Wear a Scarf